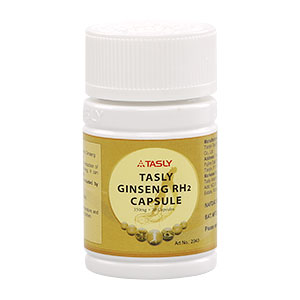 Dosage
Three times a day; two capsules at a time

For thousands of years people around the world and especially people of China have been using Ginseng as a tonic. The miraculous effect of Ginseng comes from ginsenoside Rh2 with extremely high anti-cancer activity proved by modern scientific research. It can improve the body immunity rapidly and rebuild the damaged immune system. Due to lower content of Rh2 in ginseng and high price, only small part of population can benefit from this miraculous substance.

The epoch-making Tasly Ginseng Rh2 Capsule has increased the content of Rh2 by more than 1,000 times through originally created technology and bringing out the breathtaking effect of Rh2. It is proved clinically that Tasly Ginseng Rh2 can increase leukocyte levels in 2-3 days after administration. It can notably control the proliferation and metastasis of cancer cells while reducing the incidence of cancer. Promote the synthesis of DNA and RNA and improve the body immunity.

Advantages
• Safety: an all natural bioactive and anticancer ingredient from ginseng
• Preciousness: rare monomeric ginsenoside amounting to only 1/100,000 in red ginseng
• Leading technique: biological enzymolysis, which has been applied to increase production by 1,000 times in comparison with   traditional extraction techniques and granted the second-class National Award for Scientific and Technological Progress.

I’ve just undergone a tumor surgery. Is it helpful to take Ginseng RH2?
Ginseng RH2 is made to improve organic immunity with the active ingredients in natural ginseng. According to recent medical studies,ginseng produces very strong antineoplastic effects without any adverse effect on normal cells. Besides, ginseng increases immune functions of the body, tunes up the central nervous system and the endocrine system, and delays aging. It is certain that you will benefit a lot from Ginseng RH2 in post-surgical recovery.

There are no reviews yet.

Be the first to review “Ginseng Rh2 Capsule” Cancel reply